Armageddon: Bringing it on 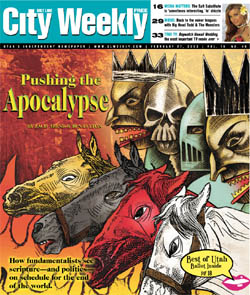 Al-Qaeda is working to turn the story of Megiddo and the End of Time into reality. And the president of the United States, George W Bush, believes Armageddon is at hand. To quote Michael Ortiz Hill, "[T]he Commander in Chief of the most powerful military force in human history has located American foreign policy within a Biblical narrative that leads inexorably towards the plains of Megiddo ..."

And he gathered them together into a place called in the Hebrew tongue Armageddon [Har Megiddo]." - Revelation 16:16

KARACHI - A short sentence in an American magazine has managed to do what al-Qaeda has not been able to achieve since September 11, 2001 - inflame large sections of the Muslim world and reignite passions between Islam and the Christian West.

A report in Newsweek that US military interrogators at Guantanamo Bay, Cuba, had desecrated the Koran - subsequently retracted - initially set off protests in Afghanistan in which at least 15 people were killed. These protests have escalated and are expected to come to a head on May 27, when Islamic movements in 25 countries, notably Afghanistan, Saudi Arabia, Pakistan, Malaysia and Indonesia, will launch mass gatherings.

A largely disjointed al-Qaeda could not have wished for better, as its underlying ideology is to stoke the fires of a civilizational battle leading to Armageddon - which the Bible sees as the final battle between the forces of good and evil, prophesied to occur at the end of the world when Christ will return to smite his enemies, led by the Antichrist. The same battle is predicted in the Islamic faith.

Newsweek's retraction comes after much of the damage has already been done, and is anyway perceived as having been made under US pressure. Further, leaders of Muslim groups now say that they have proof from other sources that such incidents did occur.

Pakistan's News International published a story in its May 17 issue based on an interview with a detainee at Lahore's Adyala prison. The man had recently been released from Guantanamo Bay and was being held pending final clearance. He claimed that he had personally witnessed several incidents of desecration of the Koran by US soldiers in Guantanamo.

Outrage in Afghanistan
The initial spontaneous reaction in Afghanistan against the report on the desecration of the Koran has now turned into an organized anti-US movement. Together with rising Taliban resistance activity in the east and southeastern border areas, a political movement against the presence of US-led troops in the country is gathering pace.

Soon after demonstrations started in Jalalabad and spread to Kabul, the Islamist but anti-Taliban faction of the Northern Alliance was activated near Mazar-i-Sharif in the north, where former Afghan president Professor Burhanuddin Rabbani held a meeting with representatives of four other groups, including the Ittahad-i-Islami, Afghanistan and members of a group from neighboring Uzbekistan. According to Asia Times Online contacts, the groups agreed to fuel anti-US demonstrations and turn them into a national movement against the US presence in the country.

There was a swift reaction in ethnic Tajik-dominated Badakshan, where 300 clerics issued a religious ruling against the US, and across the country mosques echoed with anti-US rhetoric, from Kandahar to the Panjshir Valley during last Friday's sermons. US forces arrested a few clerics, but this only added salt to the wounds.

Political upheavals in the Central Asian republics of Georgia, Ukraine and Kyrgyzstan could open the way in these countries for increased civil liberties and a voice for once-repressed forces in the country, especially Islamic ones. Similarly, the crackdown in Uzbekistan could have the same effect by heightening the voices of opposition.

Whether they be the forces of Akramia, Hizbut Tehrir or the traditional Central Asian brand of the Sufi school of Naqhbania, they are all staunchly pro-Islamic. And given geographical and cultural ties, this renewed Islamic fervor could easily spread to the ethnic Tajik and Uzbek regions of Afghanistan, where Islamic movements have been weakening over the past 10 years due to the Pashtun Taliban rule in Kabul. The ethnic Pashtun belt of Afghanistan and Pakistan is already under heavy Taliban influence.

Al-Qaeda's vision
In a recent interview with the Financial Times of London, Pakistan's President General Pervez Musharraf claimed that al-Qaeda was now a destroyed entity. However, the reality is different. The destruction of al-Qaeda, or its survival, is beside the point. Al-Qaeda's success will be judged by its ability to have brought about not only a politically motivated anti-US backlash among Muslims across the world, but at the same time to create the grounds for its recognition among Muslim academics.

Ideologically speaking, at the time of September 11, it was impossible for any Muslim academic to praise al-Qaeda or justify its modus operandi in the context of Islamic teachings. However, over the past three-and-a-half years, much has changed. The US has disbanded several Muslim world-wide charity organizations; put pressure on countries such as Saudi Arabia, Pakistan and Kuwait to change their social dynamics; attacked Afghanistan and Iraq; rolled back Pakistan's nuclear program; and laid siege to Iran.

In this atmosphere, Muslim academics in countries as diverse as Yemen, Malaysia and Morocco, and many others, have approved of al-Qaeda at a minimum as Muqadamul Jaish - a front-line force whose existence is a guarantee for the survival of all other forces behind it. The concept of Muqadamul Jaish gained prominence toward the end of the Saddam Hussein regime in Iraq, and has gathered increasing acceptance since.

'The end is nigh ...'
The Muslim media from Egypt to Pakistan consistently paint al-Qaeda, the US-led "war on terror", the invasion of Iraq and Afghanistan and events such as those in Uzbekistan in the perspective of the "End of Time" and Har Megiddo.

In Islam, before the return of Jesus (Isa), the Mehdi (restorer of the faith), will appear at the end of time to restore justice on earth and establish universal Islam. The Mehdi will be preceded by al-Dajjal, a Muslim anti-god, who will be defeated and will try to flee from the valley of Har Megiddo, which is in the Jezreel valley, in the north of Israel. Due to its strategic location, it has seen many battles. In 1918, there was a decisive battle between the British and the Ottomans, and General Alenby won the title "Lord of Megiddo". The same area now serves as an Israeli airbase.

In Muslim legend, "Khorasan" is from where an army will emerge to support Muslims in the Middle East. Their battle will end with victory in Palestine and the revival of Khilafah (caliphate). For the past few decades, Muslim academics have described Khorasan as the Central Asian states, Afghanistan and Pakistan.

"End of Time" programs are sold in CDs and DVDs across the Muslim world, which romanticize the Taliban, al-Qaeda and Hizbut Tehrir and add to their popularity.

Al-Qaeda is working to turn the story of Megiddo and the End of Time into reality. And the president of the United States, George W Bush, believes Armageddon is at hand: "The evil one is among us," he said in 2002, in a clear reference to the Antichrist. To quote Michael Ortiz Hill, "[T]he Commander in Chief of the most powerful military force in human history has located American foreign policy within a Biblical narrative that leads inexorably towards the plains of Megiddo ..."