THE AMERICAN army base - As reported in my last memo, a huge American army base is nearing completion in Israel. Reportedly, it has holding facilities for as many as 18,000 protesters.
After visiting it yesterday, I'd say way more. This base is massive. I counted ten enormous US Army issue prefab warehouses and more were going up. At the base guard post, the American flag is waving in the wind. A sign proclaims that the project manager is one Jerry Ray.
I start taking photos of the base with a cheap camera. The guard asked what I was doing. I replied, "I'm a journalist proving that a huge American military base is being constructed on Israeli soil."
"What's wrong with that?" he asked. "Who else will protect us from the Palestinians?"
"Where are the Americans?," I probed.
"What do you mean, they're everywhere here. Everyone in charge is American."
We drove away. My friend at the wheel was even more depressed than me. "It's a concentration
camp," he said.
To witness Israel's loss of sovereignty, take Route 443 to the Rosh Haayin junction. Drive ten minutes until you see Rantis Junction. The sign points to Beit Arye, and Halamish. Turn right. The base is a mile away on the left side. To salute the American flag, turn left at the entrance road.
The base is located ten minutes from Ben Gurion Airport. Luckily, a new terminal opened last year, so the Americans have the spacious old terminal to store and move whatever they're planning to import once Gush Katif and the rest of the settler vermin are rid of.

The article prompted a reporter from a large American radio network to call me. He wanted to see the base and photograph it. I met him an hour later and off we went.
First stop, the base gate. The reporter is amazed to see the American flag waving and to read on a sign that the contractor for the base is an Arab named Mustafa. He notes what a huge security fiasco hiring an Arab contractor to build an IDF base would be. Then we see busloads of Arab workers leaving the base by bus.
We continue down the road and photograph the massive buildings and underground digging.
Then we reach the checkpoint at the border of the Green Line. The base stops precisely there, the border the Americans have planned for us. We turn into the dirt road to the left and start following the circumference of the base.
The base is enormous, far huger than any other base in the country. We estimate that several tens of billions of dollars are going into the base itself but the new road surrounding the complex currently being blasted out of the rock has to add another billion dollars to the pricetag. As for the value of 50 square miles of prime Israeli real estate: more billions.
Neither of us knows what the base will be used for so I suggest, "Let's go inside and ask someone." We reach the entrance where two guards are seated. I ask one if we can speak to someone in charge of the project and photograph inside. The guards agree to call headquarters and see. One guard calls, the other points to a path to the right and says, "Let's see if they'll let you photograph up there. You've never seen so many computers and cameras in your life."
The base construction manager agrees to talk to us. We are escorted to his trailer/office where he is sitting with three other sub-managers. The radio reporter wastes no time asking, "Are those
buildings going to be used to hold evacuated settlers and protesters?"
The project manager laughs. I agree. That is not the purpose of this base.
Next question: "What is this base going to be used for?"
"A storage facility for the IDF."
I respond: "Suddenly the IDF is suffering a huge lack of warehouse space? I mean, how big is this base?"
"It will be half the area of all Tel Aviv."
"For storage? What is the American role then in this base?"
"They are building it for us. All the supervisors are American."
"What are those underground tunnels for?"
"No tunnels. It just looks that way because of the topography. Look, you came to the wrong person. I'm a simple builder from Rosh Haayin. What do I know?"

We didn't know either. We now knew the US was building this complex with an Arab chief contractor. It will not likely or primarily be for IDF use. One guess was that it will replace all the vital IDF bases in Yesha after a pullout but that wasn't satisfying. Nothing could replace men overlooking the enemy.
I received the reporter's permission to distribute the photos, six hours before I was to do a 2 hour interview on the Jeff Rense radio program. I sent him the photos and then chose a select few experts to tell me what they were of. My first two replies were:

Barry, I have seen these kind of installations when I was in the military for years I was stationed at a base where a major part of it was like this. These are not barracks of any kind. The metal facilities built up on the rocks are huge electronic facilities probably filled with CIA and extensive phone and other electronic monitoring stuff. The bunker is one just like the ones I was around at the base I was at here in California. It is a missile launch bunker. Somewhere within a mile to 5 miles are silos with the missiles in them, This kind of a facility has minimal personal but filled with covered electronics that can even be monitored from the US itself. Not one of those large buildings is for people to live in or even really work in.

This is exactly what I was told in 2001, and I quote:
"It is the intention of the U.S. administration, to ultimately turn over to the United Nations, the military base that is being considered for construction in the heart of Israel. It is the leaders of the NWO/Illuminati who will decide the appropriate time when all that will occur. The U.S. is to build the military base within Israel under the guise that it is for the use of the U.S. military. It is not. It is to be turned over to the United Nations at the appropriate time. The sole purpose of this base is for the United Nations use, not the U.S., and not Israel. This base will be a disaster to the best interests of Israel. It will be used against Israelis."

Photos 1 and 2 - Old Glory flies proudly at the base entrance.

3. Road work within the base.

10. Lots more building on the way.

11-13. Electronics tower. Below, what appears to be an entrance to a tunnel. There is a car in the shadow. Compare it to the height of the entrance doors.

14. Border of Eastern base fence. Far in the distance are the "warehouses."

Photos 1 and 2b - Old Glory flies proudly at the base entrance. 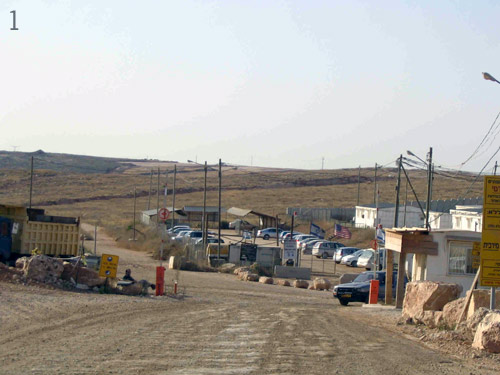 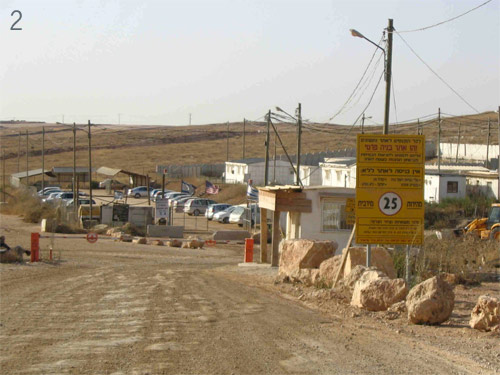 3. Road work within the base. 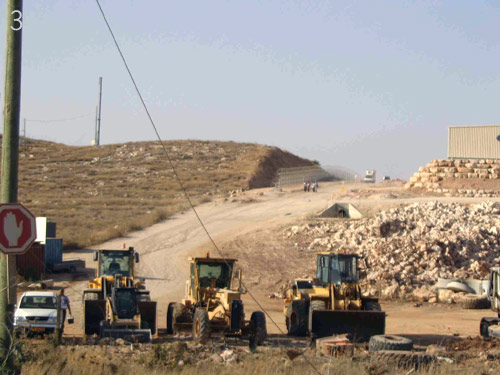 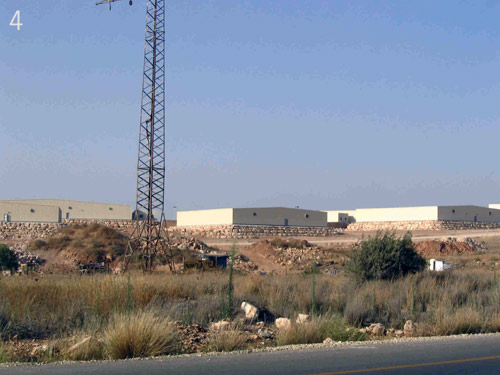 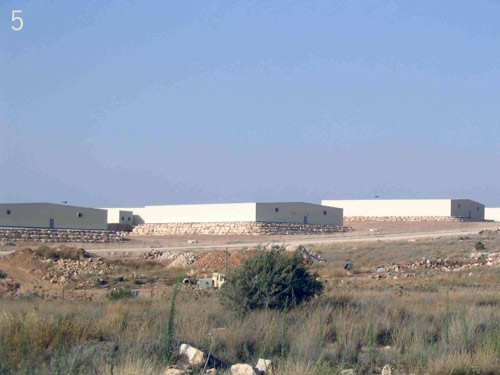 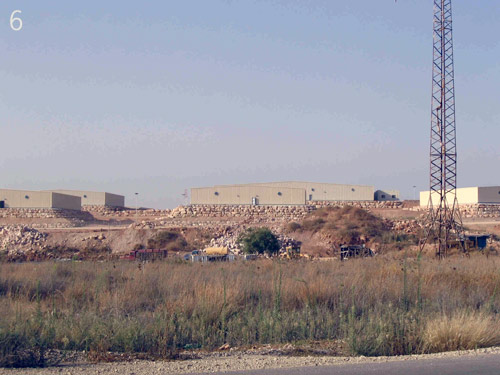 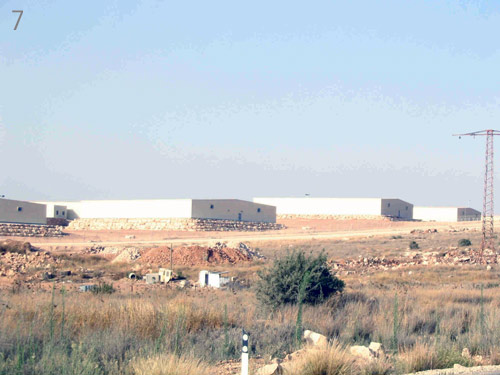 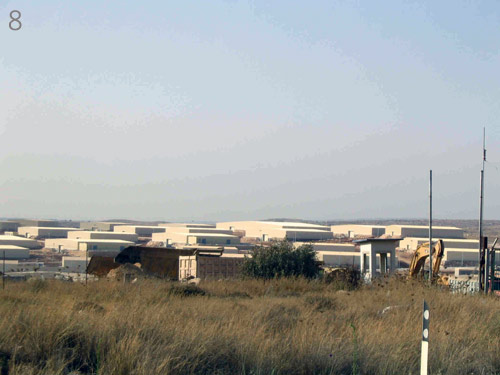 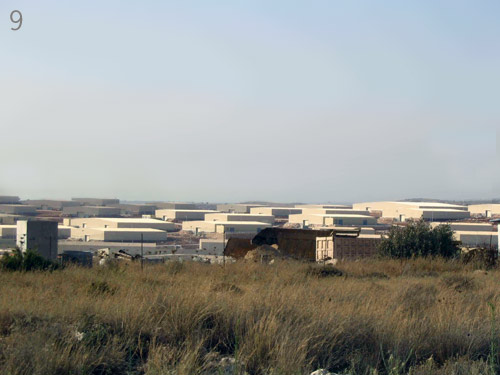 10. Lots more building on the way. 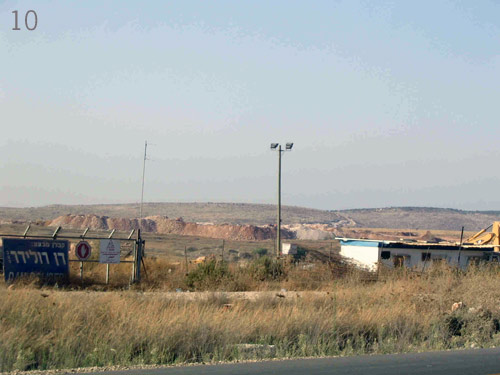 11-13. Electronics tower. Below, what appears to be an entrance to a tunnel. There is a car in the shadow. Compare it to the height of the entrance doors. 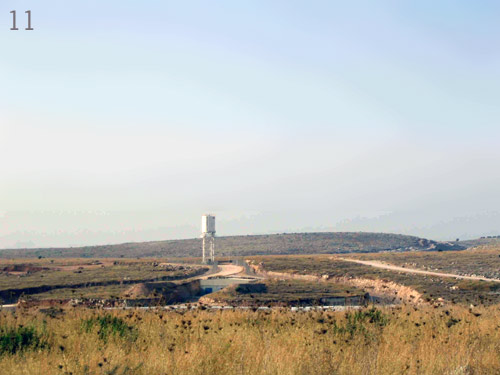 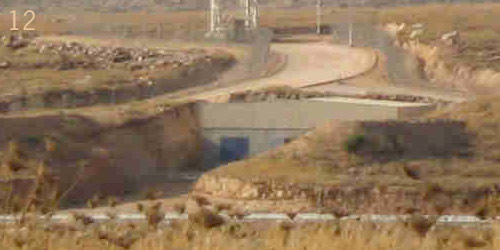 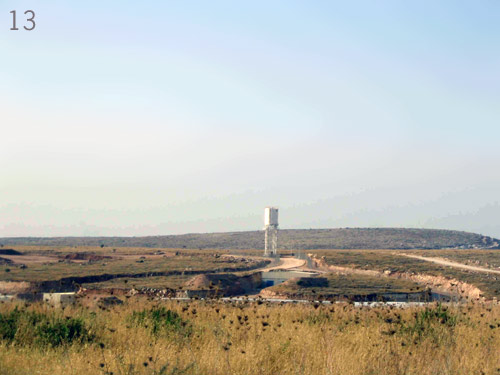 14. Border of Eastern base fence. Far in the distance are the "warehouses." 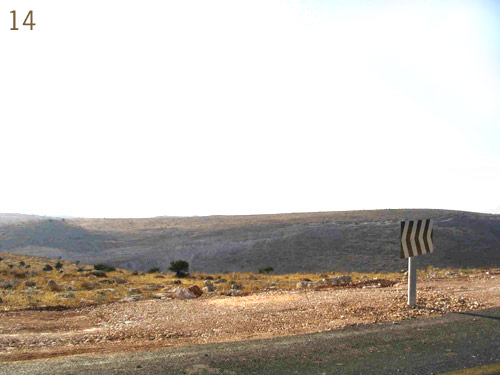 Forget Israeli sovereignty. Our precious and holy land will soon be used as a forward base for the impending New Middle East.

If anyone wants the photos to examine, I'll forward the originals to you. Also, try to listen to my two hour interview at rense.com

As always, my books Who Murdered Yitzhak Rabin; Israel Betrayed, Shabtai Tzvi, Labor Zionism And The Holocaust; The Last Days Of Israel; and Save Israel!, as well as my videos and CDS, The Dirty Secrets Of Oslo are available by writing me at chamish@netvision.net.il. BarryChamish.com