MORE BASE
by Barry Chamish
www.barrychamish.com

Reaction to my last article about the enormous military base being built by the US in Israel was worldwide and strong. Two of the correspondents actually worked on the base. Let us first get an overview of the debate as presented by some knowledgable commentators

I spoke to a person some time ago, who has worked on the site you spoke of last night. This person said that you are right in your findings and that the base is 25 sq. miles ON THE SURFACE!   The so-- called water tower and the underground door seen in the picture, is one of the openings into the underground. This goes down at a 45 degree angle towards the hill in the background. There are missile silos hidden in the ground all over. Each missile has 9 war heads attached that can be sent in 9 different directions.

I read while ago that the IDF had agreed to let the US stockpile
Military Supplies in Israel. That is actually a good thing for Israel
on a number of levels.
Second, In the event of an emergency, Israel could take these materials immediately after receiving the OK from the US. This is far better than having to wait for material to be shipped from US bases Germany or Turkey.
For what that's worth.

*
Wondered where all this spare land is coming from in the middle of the country?
The government is working on a land swap with the JNF.
They are giving the government land in the center in exchange for land in the Negev. The deal is basically acre for acre, plus some millions of sheqels to the JNF!!
The information is from a trustworthy friend who has been working at the JNF for a number of years.
Apart from the fact that it is not their land, where is all the money going?

*A base is being built by a foreign power.
A. read the Wye Accords and find out Wye: http://www.mideastweb.org/mewye.htm
then see http://www.barangroup.com/pages/projects.asp?iGlobalVar=1&divId=9

Military Base - Nachshonim Project
Project Scope: 125,000,000$
Client: Corp of Engineers of the American Army and the user is the Israeli Army.
Schedule: Start:2002 Finish:2005
Project Description: Setting up, the most advanced dry storage base in the world for the armed division of the army.
A bid that three different Consortiums competed for.

From World Affairs Brief:
One thing for sure: these buildings are going to conceal a lot of equipment and/or people in some future movement. I think the US and the Israeli government intend a forced suicidal withdrawal from all the strategic areas outside the 1967 war borders (the Green Line). This huge military and settlement withdrawal is not designed to bring peace -- nothing will -- but only to weaken Israel sufficiently so that during the next Arab/Israeli war, Israel will be forced to accept a UN mandated settlement and occupation -- in the name of "peace", of course. The cameras might, and computers would, be essential for a large logistics base or storage base if there were to be a major withdrawal of Israel Defense Force (IDF) equipment from the territories.

The advocates of the base insist that it is a gift from the US for signing the Wye Agreements. Far from being a multi-billion dollar project, the whole thing only costs $125,000,OOO. And all that are going up are some harmless warehouses.

I will lead the chorus who insist that this is the cover story and it's a flimsy one at that. $125,000,000 may cover the cost of the warehouses but there is much, much more to this base than them. Study the following photos and see what you think:
Photo 1 - This picture does not do justice to the site. This is an opening dug into the Eastern fringe of the base, about five miles from the warehouses. In fact, there are six separate concrete chambers within the structure. My colleague noted that it looks like a water diversion except, "Where will the water come from?" 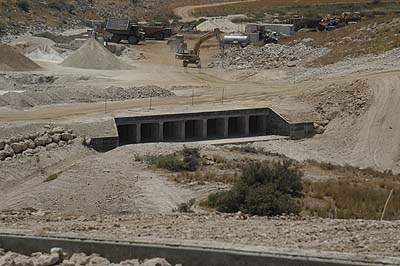 Photo 2- This is a long shot of a section of the base which is not being used to construct storage buildings. Note the concrete lot above the area, which appears to be a helipad. And note also the significant mounds of newly dug dirt in the background. Now jump to the closeups: 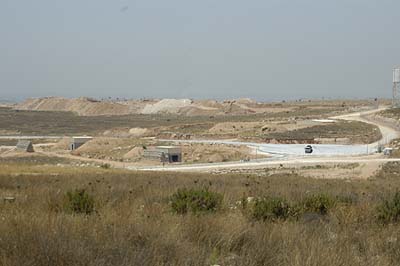 Photo 3 - This is a section of very extensive roadworks built despite tremendous engineering difficulties at the back of the base. The road follows the Green Line precisely and boasts a two lane asphalt road, a security track and a fence that will likely go electric when finished. And this road/fence extends far from the base perimeter, continuing south beyond the horizon. These are the borders agreed to by Netanyahu at Wye. Now we return to the laughable project cost estimate of $125,000,000. That would be a bargain just for the road. 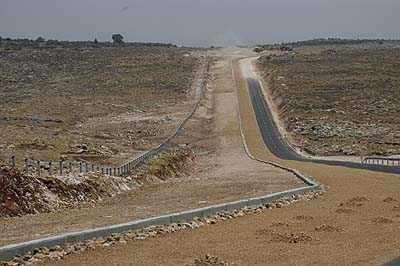 Photos 4 and 5 - That's a mighty big door for a mighty tiny building. Observe the blast walls in front of the openings. The buildings are divided into two storeys. Level One certainly looks like a concrete bunker. But level two is the same color and shape as the distant warehouses. Once the surrounding dirt piles cover level one to the top, level two will look to any satellite like just another of the storage sheds on the base. But beneath, the purpose of the concrete bunkers with their doors high and wide, is certainly not for dry storage. Unlike all the warehouses on the base, these structures have a blast wall opposite their entrances which would be very handy protection against missile attacks. We ask what purpose such a small structure has that justifies so much protection and camouflage. We conclude with trepidation that these structures could well be tunnel entrances. 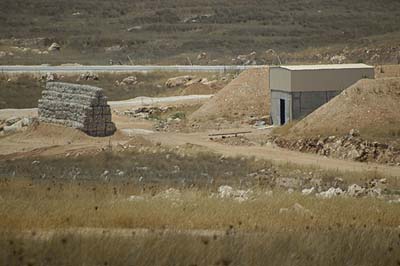 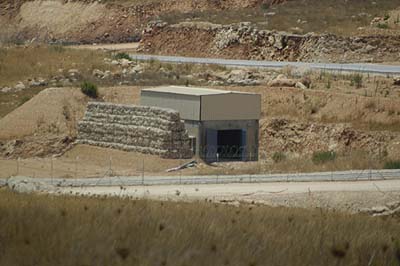 People working on this project have clearly been compartmentalized. They buy the cover story about storage facilities and are told no more than what they have to know. The US is building a base in Israel and it is more than a storage depot.
Far more.
My new DVD, the deadly War Against The Settlers, and Hebrew edition of Shabtai Tzvi Labor Zionism And The Holocaust are available at chamish@netvision.net.il
So are my English books; Shabtai Tzvi, Labor Zionism And The Holocaust; Save Israel!; Who Murdered Yitzhak Rabin; Israel Betrayed; The Last Days of Israel;